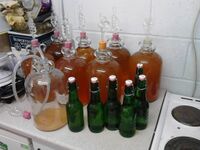 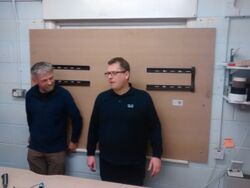 Hack to fit the screen to the fitting. 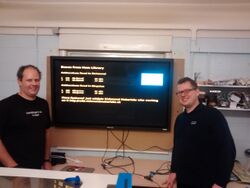 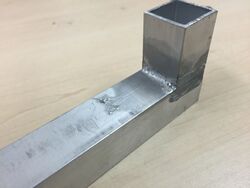 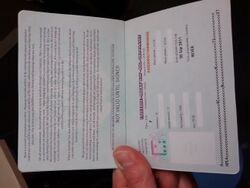 Our passports are here! 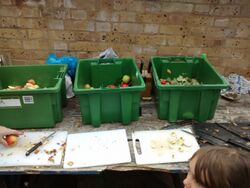 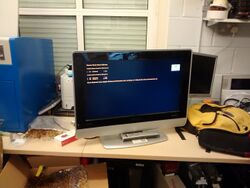 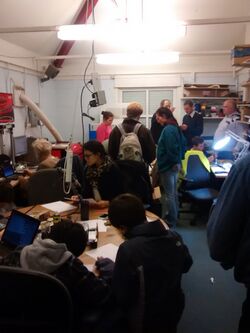 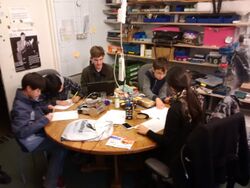 A quick view of the future 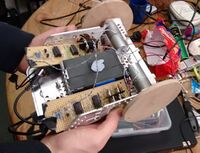 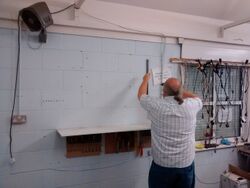 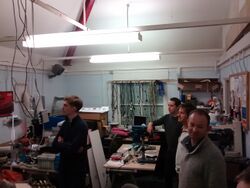 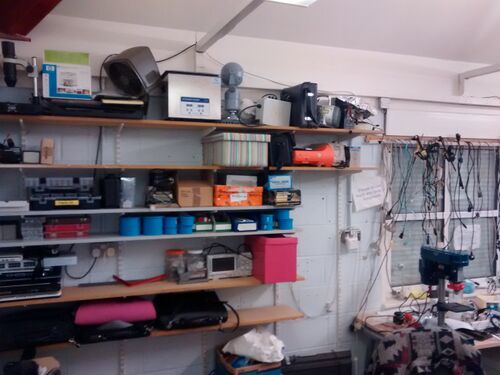 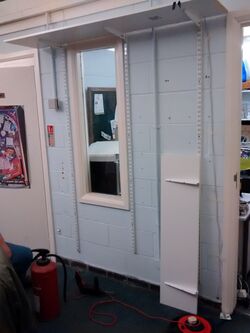 As planned it was mainly moving things around and putting up shelves.

Thanks to all that attended, specially Jon who had loads of fun setting up the shelves. All the uprights are installed, but we remain short of shelf material - donations of 8ft (2440mm) x 1ft (305mm) planks would be very welcome, otherwise we will have to buy some more. If we can replace the 6ft shelves with 8ft ones, then the shorter ones will be installed on the right of the main room.

Next phase: create a new work bench location between the doors to kitchen and cloakroom, and put up the tool racks.

An area was allocated to RHP for their stuff with the hope that it will not acumulate in the rest of the room.

We have a surplus table which we have offered on freecycle, one chair was scrapped, and one recycled, which between them gave up spares to make a third fully operational again. We had a potential new member called David who even donated some stuff, including a PC which we may use for the new laser cutter when it arrives.

Sorry to all the people we could not help, Mark, Chas, Dannielle, Richard and Jean. Special sorry for Jean as we could not find her bee frames.

Students at Kingston University - we are your local Makerspace/Makerlab or Hackspace, you are very welcome to join us during term time, we require no long term commitment, just a donation of about £1 per week.

Apple pressing (and cider making? ) in association with the London Orchard Project http://www.theurbanorchardproject.org/ using the HUG apple crusher and press is timetabled for 10th October.

We need a volunteer to work their way through the donated PC's and work out: what's serviceable? what needs parts to re-commission? and what can be stripped for parts and the shell re-cycled?

Members - have you signed up for the email list? instructions on the inside of the front door of Little House. 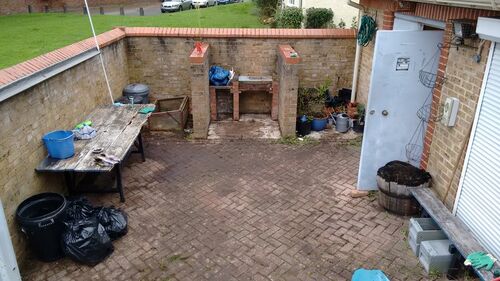 Some of us got together for a pub discussion what follows are minutes:

Issues on which all the others depend on: tidy up the space inside and outside 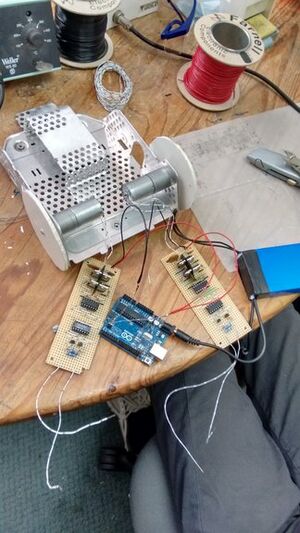 drive. It was a hidden folder in the user/apps (a single windows outlook file)

Motors and wheels were assembled.

(it's coming). Most of our laptops are missing the mains power supplies. Why? 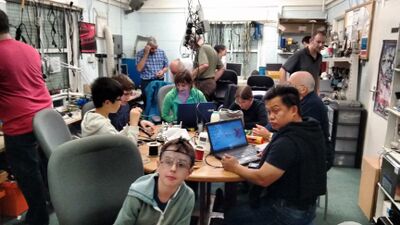 bearing that had seen better days

difference in performance in our climate, on a sunny day, between J-Lube based bubbles and Guar Gum bubbles. One J-Lube recipe makes a very convenient concentrated form of bubble juice, namely egoo. The popular Guar Gum recipe worked well for me though seemed better with 3 grams per litre. You can buy Guar Gum quite cheaply on ebay though you don't need much of it. Guar Gum definitely needs to be suspended in a slurry as part of making it, I used glycerin but I suspect rubbing alcohol works better. Finally, Fairy Platinum is supposed to be the best surfactant (soap) available in the UK for giant bubbles - just bought some, not tried it yet!

but glue had dried up before. Screen was replaced anyway and works.

video of how to do it which in turn sent us to imgur image set and later linked to Jochen Kronjager website. Ring a bell? If anybody has another microwave let us know 4kV as Jochen shows in his web can be managed. It really works, though we really needed to soak it and add 3 spoonfulls of baking soda to the water. Hopefully others can post their videos and pictures. Fire extinguisher was at the ready the whole time. Electrons

were inconvenienced during this exercise.

them apart and re-wire them.

default Android (you need to wipe your device): works great for when tablets and phones are running slow.

problem, we couldn't fix it

Document Freedom Day 2015: Flyers, stickers and posters available in the space thanks to FSFE and FSF.

where done Thank you Joel. One young hacker and his dad left happy

the internal components of a workstation.

repair. Not really our field

space. Moved the laser cutter into the corner. 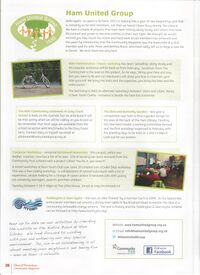 Mention in the Ham&Petersham Magazine winter 2015

replica. Between 3D printing or 2D laser cut. The latter was chosen.

to test which is better.

Little House is Leased to Ham United Group (HUG). Richmond Makerlabs is but one of many projects of HUG. Other users of the space are SWLEN (South West London Environmental Network). Mid summer a manager from rhp contacted HUG to ask if the caretakers for

or tea break. HUG said that it was fine as long as they were aware that the space was mainly for community projects. Richmond Council made an agreement with rhp. rhp now pay a monthly fee for use of the space during the day. This continued fine until rhp raised some H&S concerns in before Christmas. Richmond Makerlabs acted on them as soon as they knew about them: last week.

Rhp Myles and Joel (from rhp) have been around and left and are very happy with the state of little house. They are going to come back and use the space. Things agreed are:

bathroom. I said the latter was excessive but Myles insisted.

will be plugged into mains and not extension leads.

certified electrician in ham close and maybe leads on parents in local schools. If not rhp said they might be able to work something out. They charge £1 per plug. Andres will work on it but if anybody has any leads (pun) let me know.

for children age 4 and up.

with help from Joel